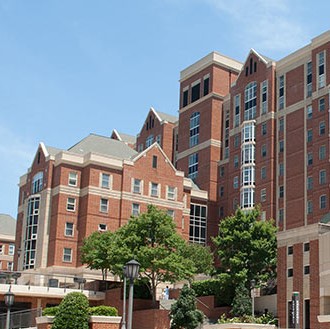 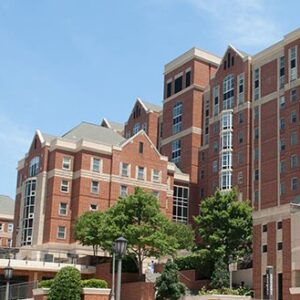 The Georgia Institute of Technology – commonly called Georgia Tech – occupies a large part of midtown Atlanta. The North Avenue Apartments originally built as housing for the 1996 Olympics have been used for dormitories to accommodate Tech’s expanding population. During the original construction, the bricks were not properly secured and the six midrise buildings in the complex (East and North buildings) required extensive renovation to the building facades to eliminate the safety hazard to pedestrians and vehicles in the Downtown Connector below.

Seriously concerned about falling bricks, the Owner (Georgia Tech Facilities Inc.) requested Pro-Bel USA to investigate the project and propose a suspended maintenance solution and cost to rectify the hazardous condition of the building facades. The Owner requested that construction be completed during the two month period of July and August when students would be on holiday and out of their dorms.

Pro-Bel determined restoration of the loose brickwork for each building be remedied using roof rigged aluminum platforms suspended from aluminum davit arms consisting of a pair of davit arms with a number of galvanized steel davit arm sockets (bases) located on the roof around the perimeter of each building at appropriate intervals. Since securement of the sockets could only be achieved from the roof to avoid damage to dormitories, epoxy adhesive anchor bolts were used to fasten the sockets to the concrete roof slab. Installers were careful to remove only as much roof covering as necessary to facilitate installation.

A roofing contractor was employed in a timely fashion to patch affected roof areas upon completion of the socket installation. Also, to minimize roof penetrations, the suspended worker lifeline u-bar-type safety anchors were installed in the structurally sound penthouse walls. Lifeline direction posed a challenge in that a substantial amount of roof-mounted mechanical equipment needed to be circumvented, however with the judicious placement of anchors this problem was solved and the critical project schedule was met as a result of expert co-ordination with all the team members involved.